What is Medical Physics?

Medical Physics is the application of physics to healthcare; using physics for patient imaging, measurement and treatment. Medical physicists are graduate scientists, normally holding post-graduate qualifications, who work in many different areas of healthcare managing and delivering services and carrying out research and development.

"Medical Physicists will contribute to maintaining and improving the quality, safety and costeffectiveness of healthcare services through patient-oriented activities requiring expert action, involvement or advice regarding the specification, selection, acceptance testing, commissioning, quality assurance/control and optimised clinical use of medical devices and regarding patient risks and protection from associated physical agents (e.g., x-rays, electromagnetic fields, laser light, radionuclides) including the prevention of unintended or accidental exposures; all activities will be based on current best evidence or own scientific research when the available evidence is not sufficient. The scope includes risks to volunteers in biomedical research, carers and comforters. The scope often includes risks to workers and public particularly when these impact patient risk”

A presentation prepared by Dr Penelope Allisy for the SFPM Congress in Strasbourg in 2012 and a flyer showing Medical Physicists at work has been prepared to illustrate some of the Medical Physics specialty areas. 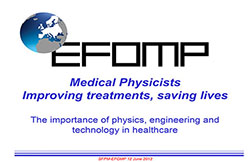 The following paper published in Physica Medica 30(4), 397-402 (2014) traces the historical origins of medical physics in the early seventeenth century. 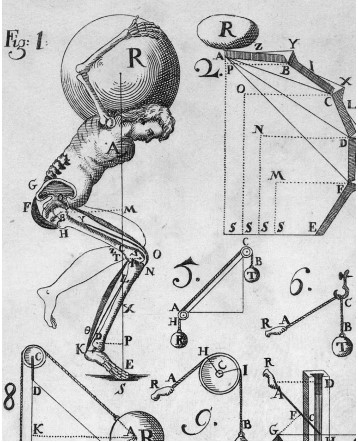 Abstract: The historical origins of medical physics are traced from the first use of weighing as a means of monitoring health by Sanctorius in the early seventeenth century to the emergence of radiology, phototherapy and electrotherapy at the end of the nineteenth century. The origins of biomechanics, due to Borelli, and of medical electricity following Musschenbroek's report of the Leyden Jar, are included. Medical physics emerged as a separate academic discipline in France at the time of the Revolution, with Jean Hallé as its first professor. Physiological physics flowered in Germany during the mid-nineteenth century, led by the work of Adolf Fick. The introduction of the term medical physics into English by Neil Arnott failed to accelerate its acceptance in Britain or the USA. Contributions from Newton, Euler, Bernoulli, Nollet, Matteucci, Pelletan, Gavarret, d'Arsonval, Finsen, Röntgen and others are noted. There are many origins of medical physics, stemming from the many intersections between physics and medicine. Overall, the early nineteenth-century definition of medical physics still holds today: ‘Physics applied to the knowledge of the human body, to its preservation and to the cure of its illnesses’.

The History of Medical Physics project was initiated back in 2007. It was initiated in 2016 as an IOMP supported activity. The brief of the project was described in the Medical Physics International Journal (MPI 2017, v.5 No1, p.68), where all project results will be published in Special Issues. The project objective is to show the creation and evolution of different equipment and methods, as well as their clinical application; the overall development of the profession and the main contributors in the various topics in medical physics. This project will continue its development over many years ahead and will be left with open end in order to be constantly updated in future. The History of Medical Physics project is also related to the visibility of medical physicists, as it will show the contribution of our profession to the overall development of contemporary healthcare. Here below is the link to all Special Issues of MPI dedicated to History of Medical Physics.

The issue of Medical Physics International (MPI 2021, vol.9, No.2)  is a very large issue with a focus on the professional development in the EFOMP Region. Prof. David Lurie, Dr Efi Koutsouveli and Prof. Paddy Gilligan from EFOMP, were acting as MPI Contributing Co-Editors for this issue, which contains papers on training, education and professional recognition from Denmark, France, Hungary, Lithuania, Malta, Norway, Poland, Spain, Serbia, Sweden, Ukraine and EFOMP.

Film produced by the Bulgarian Society of Biomedical Physics and Engineering on the occasion of the International Day of Medical Physics 2019.

Films produced by the Netherlands Association of Medical Physicists NVKF in May 2018 about the medical physics expert role.

The medical physics expert is a medical specialist with in-depth knowledge of physics and medical technology. The medical physicist will make sure that medical equipment and innovations in health care work safely and properly, and ensure that patients will get the best possible treatment.