Location: Department of Physics of the University of Coimbra, Coimbra, Portugal 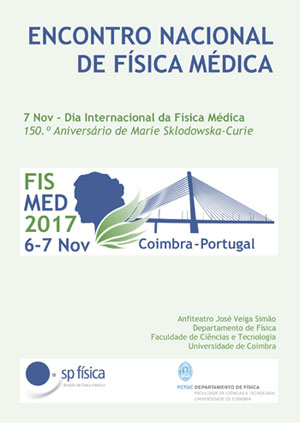 The event intends to promote bridges between hospitals and universities, highlighting the importance of scientific collaborations between all parties working together for better patient care. Furthermore it aims to raise awareness about medical physicists roles and responsibilities, enhancing safety and improving efficacy of radiation oncology and medical imaging procedures.

The opening ceremony, celebrating the 150th anniversary of Marie Skłodowska-Curie, will include an evocative session to Prof. Mário Silva, a remarkable name of the University of Coimbra, who was himself assistant of Marie Curie at the Institut du Radium in Paris (1925-1930). Following this year IDMP theme, a woman, Maria Preciosa Cruz Pontes, will be honoured, for her pioneering contribution to Medical Physics at the Portuguese Institute of Oncology in Coimbra, between 1964 and 1986, where in 1970 the first Iberian brachytherapy unit with Co-60 was installed.

The meeting will include a course on "Magnetic Resonance Imaging", integrating the series of courses of the Portuguese School of Medical Physics (PSMP2017), and four scientific sessions on Diagnostic/Interventional Radiology, Nuclear Medicine, Radiotherapy and Radiation Protection. The program will also include a round table focused on the transposition of the Directive 2013/59/EURATOM and the expected impact on Medical Physics in Portugal.